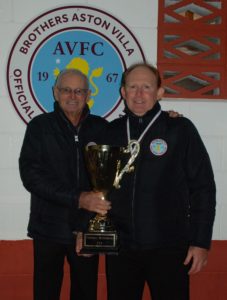 Photos and story by Bruce Bryan

There was everything to play for when Brothers Aston Villa took on Bargara in the final of the News-Mail Cup on Monday night.  The match started as steady rain set in, but the conditions did not blunt the attacking intent of both teams.

Villa drew first blood when a great interchange of passes split the Bargara defence for Nathan Carney to provide a composed finish for the first goal.  Villa immediately went on the attack again, and it was only the desperate efforts of the Bargara keeper that prevented the lead being extended.

Bargara grew in confidence as the first half progressed, and Villa goalkeeper Cory Holzberger produced several reflex saves to avoid the equaliser.  Then, on the stroke of halftime, the Villa defence failed to clear the ball in the six yard box, and Bargara hammered the ball home to take a 1-1 scoreline into the sheds.

Bargara began the second half with the wind and rain at their backs, dominating possession and forcing a succession of corners.  The pressure eventually told, with a powerful header giving Bargara the lead.

Aston Villa stuck to their processes, and as the wet weather eased, they started to find some holes in the front third.  Kyle Taylor got the ball to Jaryd Bennier on the edge of the penalty area, and Bennier’s sublime strike found the top corner to bring the score to 2-2.

Both teams continued to press for the winning goal.  Then, as the clock ticked over 90 minutes, the ball fell to Michael Stayte and he rounded the keeper and slid the ball into the empty net to send the Villa supporters into raptures.

Villa held out for the few minutes of extra time, and the full-time whistle cued scenes of joy and relief as the players celebrated with their fans.  This was truly a complete team effort, with everyone contributing for 90 plus minutes to achieve their success.  This squad has created history by holding all three available trophies at the same time, the 2017 Wide Bay League Championship and Grand Final Winners and now the 2018 News-Mail Cup.

THANKS TO OUR SPONSORS